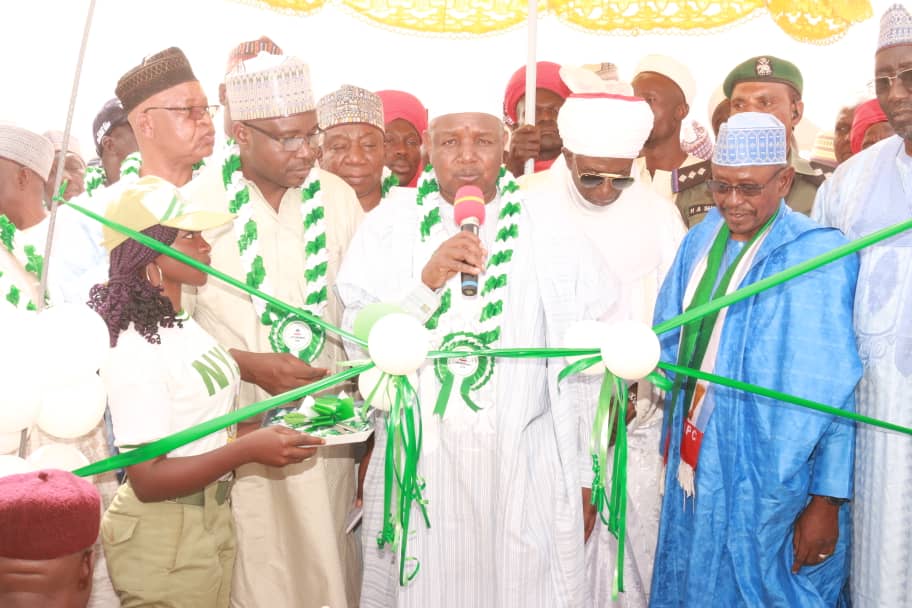 The Governor of Kebbi State, Sen. Abubakar Atiku Bagudu has expressed immense gratitude to the Management of the Transmission Company of Nigeria (TCN), for their commitment towards the completion and commissioning of the 2x40MVA 132/33kV Transmission Substation at Yelwa Yauri in Kebbi State.

Sen. Bagudu made this known during the official commissioning of the 2x40MVA transmission substation in Yauri on Monday, 11th February, 2019. He stated that the new substation would boost economic activities within the town and its environs, adding that Kebbi State is into rice and groundnut milling and the ongoing power projects within the state will significantly reduce the cost of milling

He further revealed that companies such as Dangote, GB foods and Wapco are coming to invest in the state, and that the new Eligible policy of big electricity customers connecting directly to the grid, will further complement the pioneering work that has started in Kebbi State by Labana Industries.

Earlier in his welcome address the Managing Director of TCN, Mr. Usman Gur Mohammed disclosed that the initial contract for the transmission substation in Yauri took almost 10years without being completed and after the new TCN management took over, they cancelled the contract and empowered TCN engineers to complete the project. He added that this, among many other projects across the country, has been completed by TCN engineers.

He appreciated and commended the Governor of Kebbi State for his support to TCN and ensuring that the Board of French Development Agency (AFD), approved the Northern Corridor project which will build a double circuit transmission line from Kainji – Birnin Kebbi, and the reconstruction of one of the single circuit lines between Shiroro and Kaduna into a quad line.

The Emir of Yauri, Dr. Zayyanu Abdullahi, he appreciated the Kebbi State government and TCN management for delivering the 2x40MVA transmission substation for the people of Yelwa Yauri and further charged residence of the emirate to pay their electricity bills as and at when due, in other to support the drive of sustainable electricity supply.

In attendance at the event were the Former Governor of Kebbi State Sen. Adamu Aliero, Senator Representing Kebbi South, Sen. Bala Ibn Naállah and the Secretary to the State Government Mr. Babale Umaru Yauri among others.