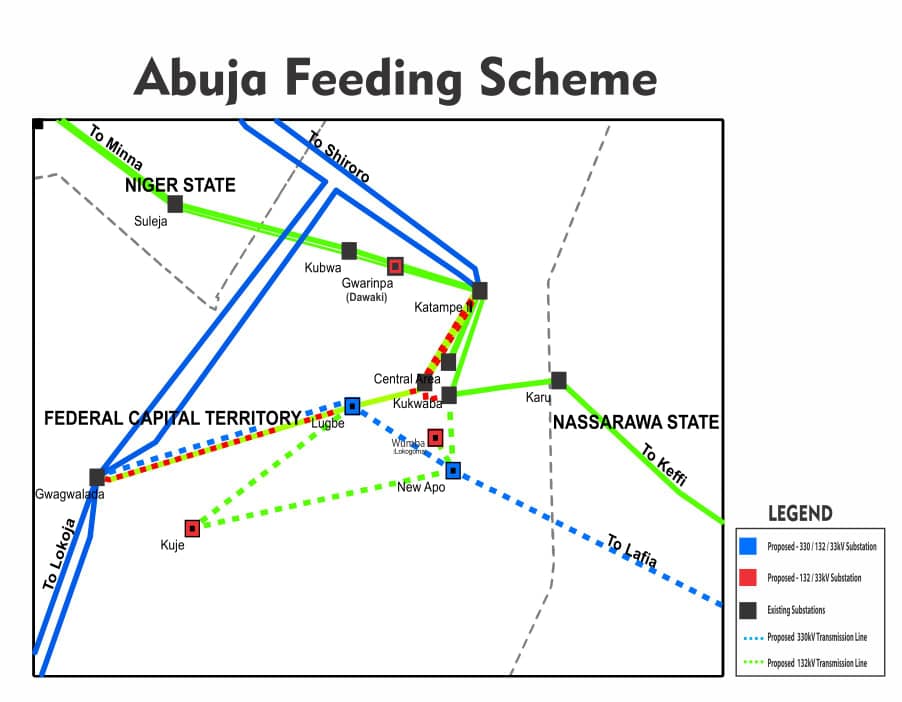 The Federal Government has kick-started the reinforcement of high-voltage transmission ring around Abuja, which will add five transmission substations, 330kV and 132kV transmission lines to Abuja, as part of efforts to increase transmission wheeling capacity in the Federal Capital Territory (FCT).

The project which is being funded by the French Development Agency (AFD) is in six lots with a maximum completion timeline of 24 months, and will on completion add transformer capacity equivalent of 624 megawatts (MW) to the grid.

The Permanent Secretary, Federal Ministry of Power, Works and Housing (Power), Mr. Louis Edozien, who performed the official ground breaking ceremony for the commencement of the project on Thursday, 11th April 2019, at Dawaki, Abuja, said the five substations would increase bulk power supply in Abuja and its environs.

According to him, the project is a partnership with everybody committed to putting their best forward. He enjoined the contractors to demonstrate first class standard in executing the project and called on the management of Abuja Electricity Distribution Company (AEDC) to be ready to off take increased bulk electricity supply to the residents of Abuja, when the project is completed.

Also speaking at the occasion, the Managing Director and Chief Executive Officer of TCN, Mr Usman Gur Mohammed said that the scheme which comprise two 330kV substations and three 132kV substations, would on completion solve bulk power wheeling supply issues in the FCT for the next 20 years.

He commended the AFD for their support to TCN on the execution of the project and noted that the relationship between the two organizations have become a model for other donor agencies.

On his part, the Deputy Ambassador of France to Nigeria, Mr. Audren De Kerdrel Guillaume said the transmission project was financed by AFD to promote quality of power for about three million residents in Abuja.

He said “The overall aim of this project is to strengthen the power supply, infrastructure and to increase the capacity of power transmission network around the capital city of Abuja.”

The President of General Electric in Nigeria, Mr. Lazarus Angbazo whose firm - Grid Solutions will build the two 330kV substations expressed their readiness to execute the project within record time and assured TCN of good working relationship and delivery of quality projects.

The ceremony was witnessed by some top government officials, diplomats, Dawaki traditional ruler and other stakeholders in the Power Sector.