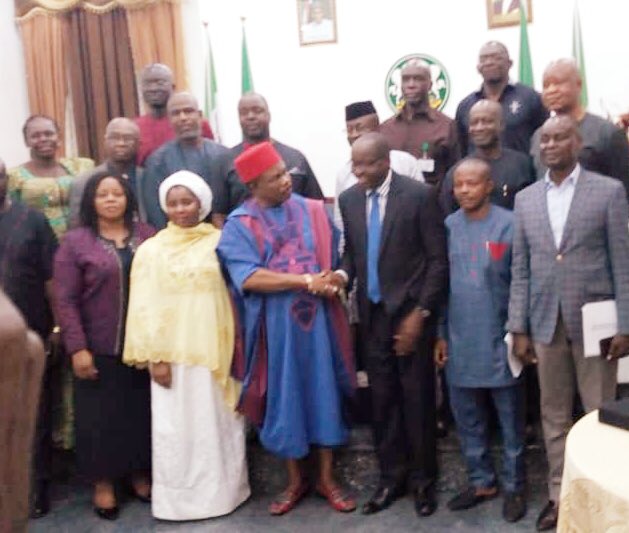 One of the critical issues in Anambra State is how to ensure increase in power supply which is fundamental to creating a business-friendly environment where indigenes and non-indigenes can have opportunities for wealth creation.

His Excellency, the Executive Governor of Anambra State, Chief Willie Obiano, made this known when the Permanent Secretary, (Power), Ministry of Power, Works and Housing, Louis Edozien, represented by Director of Transmission, Emmanuel Nosike and the Managing Director of the Transmission Company of Nigeria (TCN), Mr. Usman Mohammed, paid him a courtesy visit on Tuesday, 2nd May 2019, at the Government House, Awka.

The Governor commended the Permanent Secretary and TCN team for the visit, and said that Anambra State had become a one-stop shop for investors, and that this was confirmed in a recent publication by the Federal Government which revealed that the state came from the bottom to being number five in ease of doing business in Nigeria.

He disclosed that the future of Anambra State lies in the North Senatorial District which has a lot of resources, promising up-coming companies, including oil and gas, and a proposed airport. The Governor however said that the challenge of the area was lack of electricity supply, stating that he would do everything in his power to increase power supply in the area, and in the state generally. He noted that he had put together competent people as members of the power committee and expressed the hope that with the TCN team working together to solve the power challenge in the state, Anambra State would in no time be the light of the nation.

He called on the MD/CEO of TCN to investigate the non-completion of the 132/33kV substation at Ifite- dunu, which was awarded to MBH Power Limited. According to him, the completion of the substation would enable the delivery of more power through the 132kV transmission line from Onitsha

The Permanent Secretary (Power), Louis Edozien, represented by the Director Transmission, Engr. Emmanuel Nosike promised the Governor that the ministry in conjunction with TCN would do everything necessary to find solution to the epileptic electricity situation in the state. He noted that with adequate electricity supply in Anambra State, places like Onitsha, Nnewi and industrial centres will have more energy to work with, businesses will thrive and poverty will be reduced.

The Managing Director of TCN, Usman Mohammed lauded the efforts of Willie Obiano in getting things done in the state. He disclosed that in an effort to make electricity available in the country, the Transmission Company of Nigeria (TCN) was working with state governments to sort out Right of Way (RoW) issues which usually frustrates projects implementation. He appealed to the governor to assist TCN in resolving the Right of Way challenge along Nnobi axis, adding that TCN also needs support in acquiring land beside existing GCM Power Transmission Substation, to enable it increase its capacity with additional 60MVA and 100MVA 132/33kV power transformers.

The Governor who said he had been looking forward to the meeting, consented to TCN's requests, stating that he would meet with the Igwe, the Chairman of the Power Committee, the Secretary to the State Government, and Commissioner for lands to strategize on how to facilitate the acquisition of land and resolution of RoW issues to enable TCN fast track projects implementation.