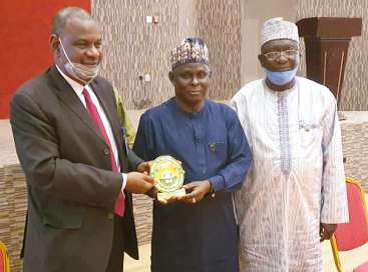 The President of the Nigerian Society of E n g i n e e r s , E n g r . B a b a g a n a Mohammed, FNSE, has commended the Federal Government for appointing Engr. S. A. Abdulaziz as the new Ag. Managing Director/Chief Executive Officer of the Transmission Company of Nigeria (TCN), saying that the appointment was the best thing the government has done for the NSE and the country at large.

Engr. Mohammed gave the commendation during a courtesy visit by the new Ag. MD/CEO of TCN, Engr. Sule Ahmed Abdulaziz, to his office on Thursday, 23 July, 2020.

The NSE President noted that the appointment was apt because the country is facing difficulties in the power sector and requires a professional in the field of engineering to find solutions to the issues which are engineering based, and that the NSE is happy with the appointment of Engr. Abdulaziz as the head of TCN. He thanked the Federal Government for the appointment and appealed to the government to equally look into other engineering based organizations with the view to ensuring that they are headed by qualified engineers. He enjoined the Ag. MD/CEO TCN to do his best to live up to expectation and not fail the engineering community because his success or failure is the collective success or failure for the nation's engineers.

Engr. Mohammed said that the NSE is always available to offer professional assistance and advice whenever it is called upon. He advised the new Ag MD/CEO to ensure that he fosters team spirit among his Management team so that the company can move forward. With proper synergy, he said, the team can achieve a lot.

Also speaking during the visit, Engr. Ali A. Rabiu, the President, Council for the Regulation of Engineering in Nigeria (COREN), acknowledged that the country is facing very serious power challenge and prayed that the Almighty would give the new Ag. MD/CEO of TCN the wisdom to lead TCN to a better future.

Responding, the Ag. MD/CEO, Engr. Abdulaziz expressed appreciation for the warm reception by the Presidents of NSE and COREN and promised to do his best to move TCN to the next level. According to him, “I have a team of engineers who are equally experienced in the power sector and I would continue to work with them to ensure we achieve our goal for TCN, in line with the plan of the present administration for the power sector” He stated that he would welcome constructive ideas and advice from the engineering bodies, saying that his team would work closely with NSE and COREN, listen to constructive criticisms even as TCN continues to work to ensure that it further expands and improves grid efficiency and reliability.

The new MD/CEO noted that even though TCN has its challenges, he and his team are poised to do their best to ensure remarkable change in the system. According to him, “we know that there are problems but we would, by God's grace ensure that there is significant change in the nations grid moving forward” he said.